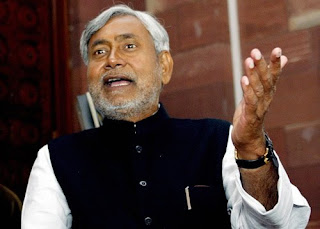 The last two months – devoted to the ‘Vishwash Yatras’ - have been excruciatingly hectic… reason why I could hardly interact on the blog। But these have been truly and immensely insightful.

Honestly speaking, I felt duty-bound to undertake this campaign। On assuming charge as the CM, I had promised that I would not go back to the people to seek their votes for another term if I realized that my government had failed to deliver. The benchmarks were laid out by the Vikas Yatra undertaken then by us…॥ This Vishwash Yatra (after four and a half years of our government) therefore became essentially an exercise in self appraisal and assessment.

Having concluded the Yatra, I have today, like most of our brethren in the state, a fairly modest sense of assertion that Bihar is very much on the way to better, more secure times। One could easily sense that across sectors, schemes and programmes, the foundations that have been laid are strong enough to sustain progresses over time. You would surely appreciate that laying down the footings was the most critical and yet most consuming of the tasks cut out for any new government here.

Of course, I am not entirely satisfied, and a lot is still to be done। Having said that, rapid growths in key spheres achieved over the past four-and-a-half years do not escape notice anymore. Importantly, we are also witnessing a very positive social assertion, thanks particularly to the empowerment of our womenfolk, and a genuinely growing sensitivity among the rural poor towards education. I have always maintained that only when the masses begin to have a natural sense of ownership can any development sustain. It feels good that bettering health services, transport and communication infrastructures, etc are there to aid this social change.

It is vital to note here that this social transformation, or for that matter, any development, would not have been possible without peace in society। I had shared in one of my previous posts that ensuring lasting peace was a critical bottom-line for my administration. I am happy at the yields today.

In the course of my Vishwas Yatra, I wanted to review the development projects launched by the state government in different districts. This would have been possible only by visiting different areas, interacting with people and reviewing the progress of the work with the district officials.
The format of the Vishwas Yatra enabled me to achieve my objective। I started off my yatra with a visit to a village in the morning during which the chief secretary or the development commissioner used to accompany me. These top bureaucrats sometimes were in such villages where even a block development officer may hardly ever have turned up in the past.

This enabled us to oversee projects and schemes, identify problems on the spot and take suitable immediate steps. It was essentially a reality check even as we took governance to people’s doorsteps.
A review meeting with the district officials after the visit to the village was part of the yatra। It was the first time a chief minister held such a meeting at the district headquarters. I had fixed 23 subjects to assess the development works in a district. Each meeting used to last for at least four hours during which we identified bottlenecks and tried to remove them.

I used to address a public rally at the district headquarters in the evening before dropping in on a local associate or a party worker’s house for dinner। At the outset, it was originally planned that I would address only one rally at the district headquarters. But I invariably ended up addressing two rallies in a day. henever I went to a village in the morning, I always found a large crowd waiting patiently for us. During these two rallies, I used to address at least 30,000 people a day.

The Vishwas Yatra was, however, not merely an exercise to review the development projects or to get a feedback of the people on my government’s performance। It was also an opportunity to feel the winds of changes across the state. During this yatra, I experienced many positive changes. There are a few examples which come quickly to my mind.

I visited Dharhara village in Bhagalpur district where people planted ten trees of fruits for every girl child born there. This was a novel concept which was not only environment-friendly but was also aimed at safeguarding the future of the girl child. Its novelty apart, it is so intimately contextual in our times that I wouldn’t be amazed if this model is soon showcased as an ideal social practice in many part of India.

I also visited the house of a schoolgirl Khushboo at her Bhogaon village in Katihar district। Khushboo was the second topper in this year’s matriculation examination. She fought against all odds to achieve this distinction. Her school was located five kilometre away from her village but that was no deterrent for her. She said the bicycle that she got under the Mukhyamantri Balika Cycle Yojna helped her in her preparation for the examination. She could save her time earlier spent on commuting and devoted it towards her studies. I had a sense of satisfaction when I handed over the cheques to her for her achievements….and a hope that she becomes a role model for many youngsters.

My visit to Aurahi Hingna in Araria district, the native place of the great Hindi litterateur Phanishwar Nath Renu was a very emotional experience. Renuji had penned down several novels and stories like Maila Anachal and Parti Parikatha, depicting the lives of the people from the underprivileged sections of society in the Kosi belt. I chose to travel by road in the Kosi belt to see the region so vividly described in Renu’s masterpieces.

I met two of Renu ji’s wives -- Padmaji and Latikaji -- at the village. When I touched their feet, they blessed me affectionately. They later send local delicacy patua ka sag & roti for me in circuit house. Since the region has been famous for kattha (catechu), I decided to develop a forest for khairwood which will be known as “Renuvan”…. a small tribute to Renuji’s great legacy.

I must admit however that some other experiences have been terribly moving as well। I visited a village in Munger district where scores of people were disabled because of the excessive fluoride content in water. I was dismayed to learn that successive government had failed to provide safe drinking water to the village. .There are other areas in the state where arsenic content in water is posing health problems to a large number of people.

This is why I said in the beginning that I am not fully satisfied. A lot of things are to be done, and we are already in the process of prioritizing some of these.

On a more personal note, I must share with you that I have not taken any leave as such during my tenure. I once went to Mumbai for a day to receive an award, and stayed in Bangalore for a night for a wedding. I also went to Punjab and Kolkata for election campaigns and visited Mauritius once as part of an official delegation.
I have been working everyday without a break, thinking often of the philosophy of “aharnish seva (uninterrupted work through day and night)”। I understand this will need to go on, without any let up…. in the hope of more and more people joining together to bring a brighter future for all of us.