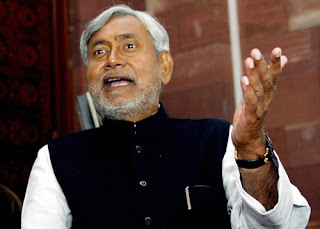 The national calamity in Bihar following the Kosi river changing its course highlights the state of affairs in Bihar, once rated as the best in administration. Since taking over as the state chief minister, Nitish Kumar has been trying to rebuild the system of governance that has virtually broken down. When he came to power in Bihar in 2005, it was heralded as the beginning of a new chapter in the history of the state. Nitish Kumar became the chief minister, with a promise to turn the state around. Three years on, Mr Kumar seems to be on track, although Bihar might take a while to show results.
Mr. Kumar wants to make Bihar a developed state by 2015. Bihar being primarily an agricultural state, Mr Kumar has been stressing on agro-based industries . He believes this will help in keeping land acquisition to a minimum. The government has identified agro-processing, handloom and textiles, handicrafts, pharmaceuticals and leather as areas with comparative advantage. The other areas where he has made a good start are employment generation and infrastructure development. He beat other states to put in place an employment-guarantee programme for agricultural labourers, which promises 80 days of work, in addition to the 100 days mandated by the National Rural Employment Guarantee Programme. His government has adopted a new poverty measurement method, so that a bulk of the families living below the poverty line could be identified and have schemes targeted at them.
His goal to develop roads in Bihar has been tagged to a three-year timeline, by when he hopes to have Bihar rival the best road networks in India.
Even on the administrative front, there are several big tasks waiting for his attention. For almost 15 years, Bihar didn’t even have a proper budget. Mr Kumar has also identified promotion of investment opportunities as equally important. With poor infrastructure and the absence of long-term policies hindering private investment, he has kickstarted a series of legislative and administrative reforms. A new industrial policy was put in place in 2006, as was the Bihar Infrastructure Development Enabling Act. A new policy for the sugar processing sector — an important crop in the state — was also brought in. The new industrial policy makes land available at concessional rates and promises reimbursement of 80% of VAT deposited. And these initiatives seem to have paid off, with the government receiving proposals from a number of big sugar manufacturers. An industrial complex with sugar mills, ethanol and power generation plants has been cleared. Measures to revive the textile industry have also been pushed through. With the state relying almost entirely on the Centre for its power needs, Bihar plans to put up new thermal and hydel power plants.
Courtesy - http://economictimes.indiatimes.com/articleshow/4931000.cms?flstry=1
Posted by Satyajit N. Singh at Thursday, September 17, 2009