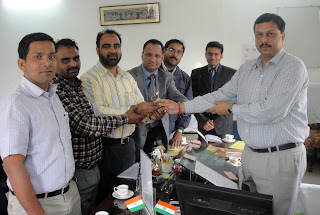 A team of five delegates from Doha, Qatar met Mr.Vivek Kumar Singh, CEO, Bihar Foundation and Mr. Satyajit Narayan Singh, Manager Public Relations to discuss the possibility of opening a chapter of Bihar Foundation at Doha, Qatar on monday. The team was headed by Mr. Shakil Ahmad Kakvi, President, ‘Indian Association for Bihar & Jharkhand (IABJ). The Indian Association for Bihar & Jharkhand has been serving to the needs of people of Bihar & Jharkhand at Qatar, for several years. Mr. Bilal working in Qatar Petroleum shared some of the problems they resolve–’Non payment or less payment to migrant Bihari laborers, improper visa issue etc. are the frequent problems we face.’

Mr. Shakil also informed about his ‘Kainat Foundation’ under whose aegis he has opened a school at his village Kako, Jehanabad to uplift the education system of his native people. The school is seven kilometers from the town but fortunate to get the CBSE affiliation. “I live in Qatar but my heart beats for Bihar. I want to payback to my motherland whatever I could”- said Mr. Shakil.

It was unanimously agreed that Bihar Foundation, Bihar will open its Chapter at Doha in association with ‘Indian association for Bihar & Jharkhand’. The chapter will communicate in two ways – one, what the Government can do for the migrated Biharis and another what NRBs can do for the development of Bihar. Soon NRBs of Qatar will meet & frame up the shape of the Doha Chapter & send the list of Executive Committee members to the parent body for approval. Mr. Shakil promised to bring social entrepreneur like him for developing Bihar and would also promote art, culture and image of Bihar in Qatar.